Despite covering just 3 percent of the world’s land, peatlands store twice as much carbon as all the world’s forests, (UNEP) demonstrating just how vital Peatland restoration is in our efforts to reach net-zero. Restoration, however, isn’t simply an effort to capture more carbon. Peatland degradation caused by drainage for agricultural, horticultural and energy production is estimated to release around 1.3 gigatons of CO2 into the earth’s atmosphere yearly (that’s 1.5 times the amount produced by air travel).

Inaction for our peatlands subsequently presents a double-edged sword. What about the shield?

Current initiatives and policies are in place to bolster peatland restoration. The Global Peatlands Initiative, lead by UN Environment, was established in 2016 to facilitate an international effort to improve conservation, restoration and sustainable management of peatlands. In the UK, a Peatland Strategy aims to conserve 95 percent of the least damaged peatlands and restore 80 percent of the remaining damaged peatlands under restoration management by 2040.

The answer to that question is a resounding no.

A core element of the ‘S’ criteria is engagement with the local community. Contextualising peatlands with rural communities in Ireland brings an entirely different narrative; not a clearcut solution but one that is complicated by turf cutting.

Turf cutting, also known as turbary rights, is “a right to cut and carry away turf from the bogland and includes the right of preparing and storing on the bog-land any turf cut therefrom.” All the more, it is a huge part of Irish cultural identity. In a recent interview with turf cutters from County Kildare, one man said, “I’ll not stop cutting turf here no matter what law they pass. It’s our tradition. We’re doing no harm here.” He then explains that his mother’s dying wish was that he continued the tradition that has spanned centuries.

Home to Irish folklore, including the púca and the grógach, bogland stores a wealth of national history, as well as tradition. Bogs have been dried and cut for fuel ever since the 17th century. In the midst of World War Two, however, peat sods were regarded as ‘Indigenous Fuel in a time of Need’ when coal imports fell drastically. Efforts to cut peat sods then rose exponentially. 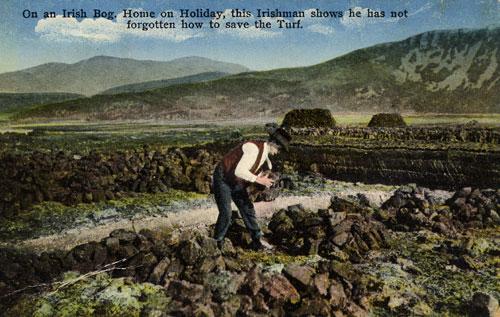 The sense of sovereignty which emerged from peatland continues today. In the face of oil and gas prices following Ukraine, one County Kildare turf cutter exclaimed, “I never felt so happy to have a shed full of turf. I don’t care what Putin does with his gas, we’re independent.”

However, the role of peat as a fuel has come to a very divided national debate. A symbolic divide between Government and local communities culminated when Ireland’s infringement of the EU’s Habitats Directive and the Environmental Impact Assessment Directive brought Irish peatlands to the attention of the European Commission in 2002 and 2011. Ireland’s 2015 Peatland Strategy subsequently identified “a breakdown of communication and a breakdown of trust between the relevant parties which may be difficult to restore.” Nevertheless, the Strategy outlined its mission to balance the protection of traditional rights through fair compensation with the protection of the environment. 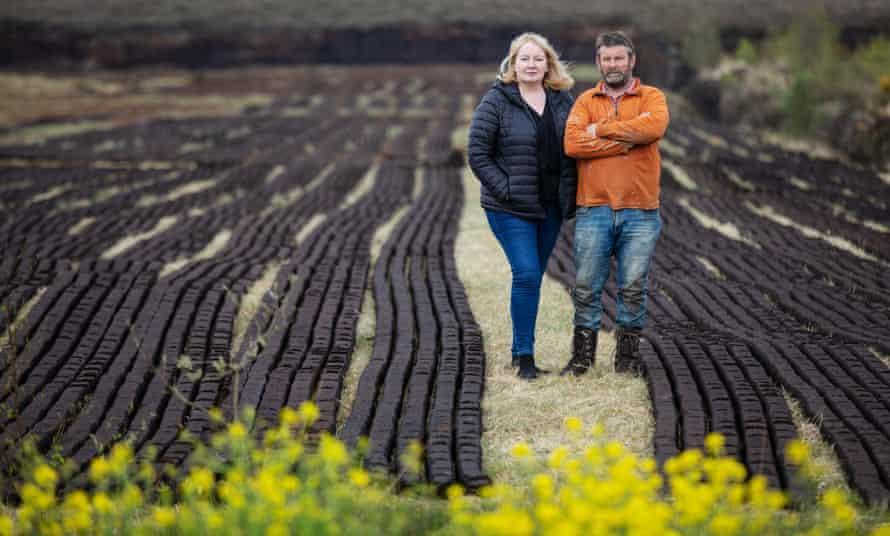 Household name and semi-state company created by the 1946 Turf Development Act, Bord na Móna, will be closing its remaining harvest bog sites in 2025. Recognised by the UNEP, Bord na Móna also plans to restore more than 50,000 hectares of Irish peatlands. A couple from County Kildare stand by contrast, as pictured above, amongst peat briquettes at Mouds Bog – a special area of conservation. Where commercial production of peat has been reduced, the oversight of the ‘S’ from ‘E’ and ‘G’ efforts has caused a substantial delay in wider environmental efforts. As Rory Carroll reports on Eamon Ryan’s, Minister for the Environment, view on the peat debate: the ‘war on peat should have been a skirmish’ on the way to bigger battles over farming, transport and renewable energy.

An irrefutable lesson from this case study is that during the war on climate change, you should never underestimate the importance of local communities. The ‘Think Globally, Act Locally’ ethos echoed in the Sustainable Development Goals has already communicated this sentiment to world leaders. However, where ESG investing is now mainstream, and corporates are pledging net-zero – what of the private sector?

CO2eco develops innovative contracts to connect corporate clients with landowners which can accelerate investment in climate and nature.  Our first deliverable in 2022 is The UK Nature Credit.