The call to arms on the climate crisis gets louder and louder for consumers, companies and governments. An alphabet soup of action groupings and regulatory bodies has emerged, but are they themselves doing enough?

One of the most robust initiatives is the Task Force on Climate-Related Financial Disclosure (TCFD), established by G20 Finance Ministers and Central Bank Governors. Roll on seven years and it has become legally binding in the UK and New Zealand, with many other countries planning to follow suit. Though recent attention by governments is noteworthy, TCFD’s backing in the private sector is broader: the framework’s supporters have a market capitalisation of over $26.7 trillion, including 1,384 financial firms responsible for assets of $215.6 trillion.

“A more efficient allocation of capital”

One of TCFD’s refrains, seemingly unorthodox at first, epitomises how TCFD stands out. Where investment into emissions mitigation is the dominating language of net zero initiatives, TCFD draws out the cost of inaction. Specifically, what are the implications of climate change for a company? What risks loom in the transition to a lower carbon-economy? In getting companies to communicate these risks in financial filings, TCFD aims for pricing the risks and opportunities of climate change. The four core elements are backed by a further 11 recommended disclosures and upheld by 7 Principles for Effective Disclosure:

1. Present relevant information
2. Be specific and complete
3. Be clear, balanced and understandable
4. Be consistent over time
5. Be comparable among companies within a sector, industry or portfolio
6. Be reliable, verifiable and objective
7. Be provided on a timely basis 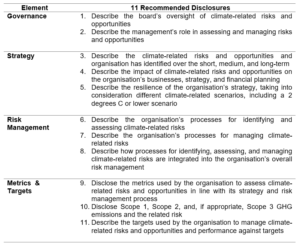 TCFD also incorporates scenario analysis into its framework to assess how transition and physical risk hypotheticals can enhance resilience strategies. A company can choose to assess publicly available scenarios, such as those published by the IPCC, or develop scenarios in-house – a hybrid option is sometimes adopted too.

Excellent in theory, but what of practice?

EY’s Global Climate Risk Disclosure Barometer 2021 examined the efficacy of climate-related disclosures from over 1,100 companies worldwide, reporting a mere 41% of organisations in the sample conducting scenario analysis. Moreover, a quality-coverage climate risk disclosure gap was reported. Where the average coverage of TCFD recommendations stood at 70%, the average quality lagged behind at 42%. Lower still, only 15% featured climate change in their financial statements.

As damning as these figures are, TCFD reported in their 2021 Status Report that disclosures had improved in quantity and quality. Acknowledging room for improvement, however, TCFD also released an annex and guidance document to close the quality-coverage gap. Seven new cross-industry climate-related metric categories were also developed to facilitate better collaboration.

With increasing uptake and increasing mandatory reporting, the TCFD certainly presents a tour de force in the sustainability arena. The end of 2021 saw the formation of the International Sustainability Standards Board, of which TCFD amongst others is to be used as a basis. A convergence of initiatives is promising, and the inclusion of TCFD is a sure sign of it being here to stay. However, perhaps TCFD’s real asset so far is in its broad support. With EY’s Global Climate Risk Disclosure finding that only 3% of companies produced a report of 100% quality, this begs the question – how long before rigorous auditing also enforces quality?

CO2eco develops innovative contracts to connect corporate clients with landowners which can accelerate investment in climate and nature. Our first deliverable in 2022 is The UK Nature Credit.