The Science Based Targets Initiative (SBTi) emerged in 2015 with the world’s first science-based certification. A coalition between CDP, UN Global Compact, World Resource Institute and WWF, the certification provides guidance for companies and financial institutions on how to best reduce their greenhouse gas emissions in order to meet global net-zero.

However, does ambition meet success?

In their latest annual Progress Report, SBTi details their most impactful year yet. With a doubling of companies committing to scienced-based targets from the year before, the reach of the SBTi has amassed from 20% of global market capitalisation to 35% in 2021 – equal to $38 trillion. Exponential growth has marched on undeterred by the combined disturbances of Covid-19 and Ukraine too; a further 500 companies have set targets within the first quarter of 2022.

Targets, of course, are futile without action – but science-based targets have not fallen at this hurdle. Instead, SBTi have witnessed a delivery of the biggest emissions reduction to date: a 29% reduction between 2015 and 2020. Moreover, SBTi companies surpassed the pandemic-induced global emissions decrease in 2020 (see figure 1 below) and are slashing scope 1 and 2 emissions by 8.8% yearly. The efficacy of SBTi has undoubtedly catapulted it from ‘start-up’ to global standard setter.

So, what exactly does SBTi target setting look like?

For corporates, the SBTi Corporate Standard provides a Paris-aligned methodology for reducing greenhouse gas emissions across scopes 1, 2 and 3. These scopes refer to emissions produced by a company’s owned or operated assets, energy use, and further emissions (such as suppliers, distributors and product use) respectively. All three scopes are then subject to near-term (5-10 years) and long-term target setting. Keeping the long-term target accountable, the near-term targets are implemented and re-calculated every 5-10 years.
Alongside decarbonisation in the near and long-term, what is referred to as ‘Beyond Value Chain Mitigation’ is strongly encouraged as an additional measure. This process involves making investments which contribute to societal net-zero, as opposed to mitigating the impact of a company’s scopes 1, 2 and 3. Endorsed examples include REDD+ carbon credits, carbon sink degradation avoidance projects and investments into carbon removal technology.

This then leaves corporates with the final task: neutralising emissions at net-zero. Where the long-term targets stipulate a 95% reduction of scope 1 and 2 emissions and 90% of scope 3, remaining carbon emissions must be removed and stored. To complete this step, SBTi allows purchasing high-quality carbon credits outside of the company’s scopes. 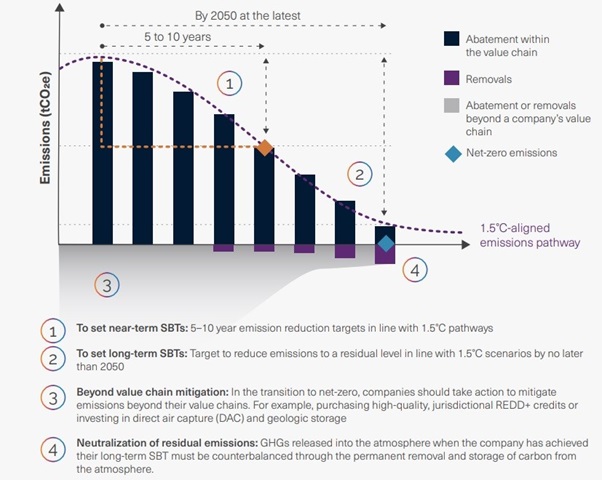 However, upcoming guidance for FLAG (Forest, Land and Agriculture) later this year will be instrumental to companies outside the FLAG sector as well. Where companies have more than 20% of their emissions and/or revenues from FLAG-related activities, a tool will be made available to ensure appropriate and accountable target-setting.

FLAG sector-specific guidance, on the other hand, will address a hotly contested area of ‘insetting’ – where a company’s scope 3 overlaps or borders another company’s supply chain, and subsequently mitigations by a company are either wholly or partially made. Carbon removals for scopes 1 and 2 will also be permitted, unlike non-sector specific corporate guidance.
Understanding the parameters of a company’s scopes and the role of carbon removals is not just complex for FLAG, but also for Financial Institutions. Due to the variety of asset classes, sectors, geographies and companies overseen by financial institutions, a separate Net-Zero Standard for Financial Institutions will be launched early next year. Consultations on this standard have already pointed to areas of interest, especially how carbon removals can be financed through credible carbon credits.

So, what can we take from SBTi target setting so far?

Although some sector-specific standards await confirmation, there are plenty of key takeaways from science-based target setting. Firstly, with neutralising residual emissions being SBTi’s final step to net-zero, it is essential that nature-based carbon removal projects secure funding now. This is so that projects, such as afforestation, have been planted and grown to the point where they can sequester the amount of carbon needed to neutralise emissions by 2050. For the FLAG sector, deploying carbon removals is ever more pressing for reducing scopes 1 and 2 emissions. However, the rush for carbon removals in FLAG will be mitigated by the upcoming guidance on insetting, providing a more collaborative environment between FLAG parties and carbon credits.

Inevitably, takeaways are not without questions. For instance, when is the right time for an SBTi company to start integrating carbon removals as depicted in figure 2? What are the rules on matching vintages with emissions? Could emissions avoidance credits also be implemented by Financial Institutions to finance the technology required for decarbonisation?

Although some areas remain unclear, SBTi’s proliferating influence is transparent. With over 2,200 SBTi companies, two-thirds of which intending to cut emissions at a higher rate than required, a climate science-led private sector can make limiting global warming to 1.5 degrees less of a smoky pipe dream and more a green reality.